High cutting performance and efficiency with all materials 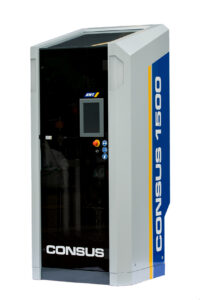 The ConSus abrasive mixing unit (AMU) enables the use of the Water Abrasive Suspension (WAS) technology in the machining industry. A continuous suspension jet provides significantly higher cutting performance at lower pressure compared to conventional Water Abrasive Injection (WAIS) systems. With WAS waterjet cutting there are no limits in terms of cutting material.

Industrial users are faced with the challenge of having to process ever stronger and extraordinary materials quickly and precisely. At the same time, costs, resource input and energy consumption must be reduced while sustainability has to be increased. The technology of abrasive waterjet cutting allows the separation of materials with a high-pressure water jet to which an abrasive agent is added. The cutting process is non-contact and does not generate heat, so material properties are preserved. Stresses, hardening, deformation and delamination, the detachment of individual layers during the processing of composite materials, which can occur with other cutting techniques, are eliminated.

More precise, more powerful and more rapid with WAS

In abrasive waterjet cutting, a distinction must be made between the conventional WAIS method and the particularly powerful WAS method, for which ConSus is the global technology leader. With WAIS, the abrasive is sucked out of the mixing chamber by negative pressure (Venturi effect), so that a three-phase mixture of water, abrasive and 95 percent air is created. The air content reduces the focusing and precision of the WAIS jet, so that the cutting performance is reduced by about one third. For stationary use of the WAS process, ConSus has developed the ConSus abrasive mixing unit, which produces an air-free two-phase jet of 97.5 percent water and 2.5 percent abrasive. This leaves the cutting nozzle at almost twice the speed of sound. Since the abrasive particles are directly bound in water, the suspension jet is more stable, precise and powerful than with WAIS. In addition, the abrasive remains undamaged in the medium, which further increases the cutting performance.

Continuous suspension jet for industrial use 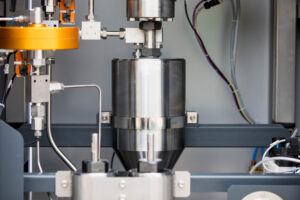 Until now, WAS cutting processes were only possible with time-consuming interruptions to refill the abrasive and could therefore not be used for industrial-scale applications. The worldwide patented sluice process of ConSus (Continuous Suspension) now allows the constant supply of abrasive during operation: When the abrasive level in the high-pressure vessel of the AMU drops below a certain point, a ball valve opens and new abrasive is sucked into the intermediate pressure vessel. The ball valve is then closed and new pressure is built up in the intermediate vessel. The abrasive suspension can then be fed into the high-pressure vessel and the intermediate vessel can be depressurized.

Clear performance advantages and grants options with WAS 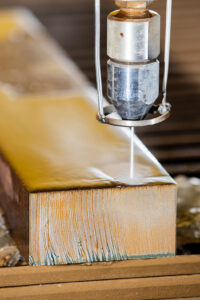 Photo ConSus: Different materials such as construction steel can be cut quickly and precisely with ConSus.

ConSus can be easily integrated into existing waterjet cutting systems; only the pump and the control system need to be adapted. Studies by the Fraunhofer Institute for Production Technology confirm that the AMU, which is operated at working pressures between 500 and 1,500 bar, has significant technological as well as economic advantages. Compared to WAIS systems, which usually operate at 4,000 bar, pressure and energy consumption are reduced by around 70 percent. At the same time, CO2 emissions and running costs are reduced by 50 percent and performance triples. The wear of the components is also decreased. The suspension jet shows its strengths particularly in the cutting of demanding high-strength, thick and tensile materials. Due to the high energy and CO2 savings, users can apply for financial support for numerous initial and replacement investments in WAS components from the German Federal Ministry of Economic Affairs and Climate Action, if the company has a German site and the project is to be implemented in Germany as well. For an easy comparison of WAIS and WAS in their performance, ConSus has released the free of charge Calc a Cut Waterjet Calculator, in which relevant data such as material, cut quality and calculation basis can be set individually. The web app is available in English and German for smartphone, tablet and PC.

The ConSus Calc a Cut Waterjet Calculator can be accessed at the following URL: https://waterjet-calculator.consus-gmbh.com/.

ConSus – ANT Stationary Cutting Solutions GmbH is part of the ANT Group and specializes in the requirements of the processing industry. ANT is the technology and market leader for mobile waterjet cutting and has more than 20 years of experience with Water Abrasive Suspension (WAS) cutting technology. The newly founded ConSus GmbH supports customers worldwide to benefit from the cost-performance advantages of the WAS process in stationary applications as well.

The core competency of ConSus GmbH and the ANT Group lies in the Water Abrasive Suspension (WAS) cutting technology and in special-purpose mechanical engineering. Numerous worldwide patents prove the technological know-how of the company group.

We are happy to add your information to our distribution list for press releases, invitations to events and further information from our network:

This website uses cookies to improve your experience as you navigate the site. These cookies store the categorized cookies in your browser as they are essential to the functioning of the site's basic functionality. We also use third-party cookies that we use to analyze and understand how you use this site. These cookies are stored in your browser only with your consent. You also have the option to disable these cookies. Disabling some of these cookies, however, may affect your browsing experience.
Advertisement

Advertisement cookies are used to track visitors across websites. The intention is to display ads that are relevant and engaging for the individual user and thereby more valuable for publishers and third party advertisers.